Herbicides for Weed and Brush Control in Natural Areas

Several herbicides are well suited for use in weed and brush control in natural areas. The herbicides discussed here have been carefully established to be safe and effective if used properly. Before using any herbicide, it is essential that the label be read completely and its specifications followed.

Herbicides are used to facilitate restoration in prairie and savanna ecosystems in conjunction with other methods, including hand pulling, mowing, cutting, prescribed burning, seeding, and cultivation. Herbicides should be used as part of an integrated weed management strategy. The precise treatment method used will depend upon the target species, its life history, the extent of the problem, and the compatibility of the herbicide with the restoration objectives. 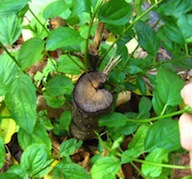 Invasive plants are a threat to management and restoration of natural ecosystems. In many areas, due to neglect over many years, existing native vegetation has become heavily infested with invasive species. Most of these invasive species are nonnative, having been introduced from Europe, Asia, or other distant places. Examples of exotic species include sweet clover, wild parsnip, reed canary grass, purple loosestrife, garlic mustard, honeysuckle, buckthorn, and Kentucky bluegrass. The picture to the right is of buckthorn that was cut but not treated with an herbicide.

Some native plants are unusually invasive and may also be a threat to ecosystem function. Examples of native invasive plants include smooth sumac, gray dogwood, hawthorn, sandbar willow, and prickly ash.

Invasive plants compete with desired species for light, nutrients, and moisture. They may alter hydrological regimes in wetlands, or alter the structure of upland plant communities. Although invasive plants can be removed without the use of herbicides, in many cases the cost is prohibitive. In some situations, herbicide use is essential.

The discussion here deals only with non-aquatic habitats. Some herbicides are approved for use in aquatic habitats, but the kinds, uses, and requirements are different.

For most herbicide applications in natural areas, spot spraying is preferred. This permits application of the chemical just to target species. Foliar application should be made with a low-pressure (20-50 psi) backpack sprayer equipped with a wand applicator. A sprayer nozzle which creates a flat or cone-shaped pattern is preferable. The herbicide should be allowed to dry for at least two hours to ensure adequate absorption. (Do not spray when rainfall is threatened.) Addition of a nonionic surfactant to the mixture helps ensure complete leaf coverage and increases the rate of absorption. The herbicide should thoroughly cover the foliage but not to the point of run-off. Personnel applying herbicide must be properly trained and knowledgeable about the native vegetation.

Broadcast spraying in natural area restoration is used primarily when a fallow field is to be planted to prairie. It must be ascertained first that all of the existing vegetation is undesirable. The field can then be treated with a nonspecific herbicide such as glyphosate, which kills all existing vegetation. A boom sprayer towed behind a tractor is usually used.

The table below summarizes the characteristics of seven herbicides commonly used for the control of invasive plants and noxious weeds in prairie restoration activities.

For all herbicides, the label should be read and followed.

It should be emphasized that herbicide use should be used as part of a total management system. As the table shows, none of these herbicides is completely specific. Care must be taken to ensure that sensitive non-target species are not treated.

Procedures for Herbicide Use

Wisconsin DNR webpage on herbicide use for forest management. 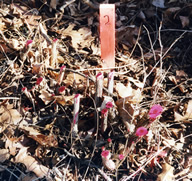 Examples of Herbicide use for Invasive Plants

Properly used, herbicides have wide utility in elimination of invasive plants and the restoration of natural areas. For specific recommendations, consult the herbicide label or use the manufacturers advice.

Land managers consider the effect of Milestone VM on desirable native forbs and shrubs when making decisions about controlling invasive plants. Milestone VM is a broadleaf herbicide that has reduced risk to the environment compared with other commercially available herbicides, making it a desirable alternative for invasive weed control on rangeland and wildland sites.

Studies were established within diverse native plant communities in Montana, Colorado, North Dakota and Minnesota to determine long-term response of native forbs and shrubs when Milestone VM was applied in early summer or fall, and to develop a tolerance/susceptibility ranking for native plants.

Please see these PDF documents for: